Changes to the Google algorithm, so-called core updates, can have positive and negative effects on the findability of online stores via the search engine. In this article we show what to consider in order to be well prepared.

As in many other industries, SEO optimization of web applications is one of the central keys to greater visibility in e-commerce. Search engines are an essential part of the Internet and are often the starting point for searches of any kind for many users. It is estimated that approximately 3.9 billion search queries are entered into the Google search box every day.

Store operators must continuously optimize their application in terms of technology and content so that their products and topics rank for relevant keywords and the application also meets the technical quality criteria of the search algorithms. A high ranking consequently ensures more website traffic and conversions.

In this article, we will focus on the Google search engine. This is mainly due to the fact that Google holds by far the largest market share in the search engine sector. Of course, web applications can also be optimized with regard to other search engines such as Bing, Baidu, Yahoo! and others. 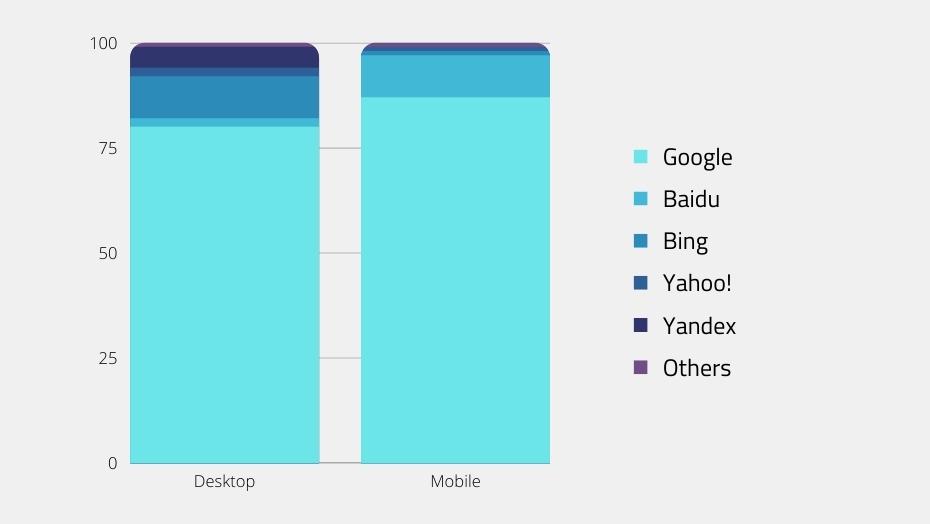 What are Google Core Updates?

As far as the parameters of the ranking algorithm are concerned, Google keeps a low profile for the most part. Only some factors of the algorithm are known, others remain opaque. SEO measures are therefore on the one hand a matter of calculation, but on the other hand they also require a willingness to experiment, a precise understanding of the target group and observation of the direct competition.

In addition, Google regularly makes adjustments to its algorithm. The biggest of these are called core updates. Once an update has taken place, it can have an immediate impact on the ranking and, in the worst case, even lead to a loss of visibility. SEO is therefore to be understood as an ongoing process and measures must be regularly adapted or supplemented in order to remain effective.

Why does Google make changes to the algorithm?

According to Alphabet, the company behind Google, updates are constantly being made to the ranking algorithm to better understand the user and improve the user experience of the search engine. This includes, for example, making the Google bot more literate in crawling and indexing web pages and understanding context better in order to deliver the exact content that best matches the user's search intent for incoming search queries. In this way, Google has been able to significantly increase the accuracy, functionality and quality of search results in recent years.

What do Google Core updates include?

Google adjusts its ranking algorithm on a daily basis. Most of the time, these are small updates, because larger changes like the Core Updates are only carried out one to three times a year on average. Larger updates are also announced shortly before they are carried out on the Twitter channel "Google Search Central".

Later today, we are releasing a broad core update, as we do several times per year. It is called the November 2021 Core Update. Our guidance about such updates is here:https://t.co/0LAL28ueDq

Particularly in the case of major adjustments, the weighting of different ranking factors may also change. In some cases, certain parameters are completely removed or added.

In the past, there have already been many updates that brought extensive changes. The information associated with the respective announcement is usually quite scanty and not all updates were announced by Google in advance. Therefore, many SEO professionals have made it their task to conduct causal research in the case of conspicuous changes in the ranking and to investigate the focus of unofficial updates.

We have listed some of the most important adjustments to the algorithm below:

The SEO software provider searchmetrics has published a list of all Google updates published since 2010 on its website.

SEO optimisation means one thing above all: understanding your own target group and aligning the user experience of the online shop accordingly. This applies to both content and technical aspects.

The basis of a good ranking is therefore the target group-oriented preparation of content with added value as well as an appealing design that corresponds to the habits of the target group and is easy to use. In addition, technical aspects such as the loading time, stability and availability of the shop must be taken into account.

Those who optimise their web application in a target group-oriented manner and taking into account the advice from Google will potentially lose less traffic in the event of major adjustments to the ranking algorithm. However, due to the great intransparency of the updates, the risk of a ranking loss cannot be completely ruled out. Nevertheless, it can be helpful to observe social trends, because these may also be included in core updates. This is what happened, for example, with the May 2022 Core Update, from which platforms with a focus on video content benefited in particular.

In the following chapters, we will show you how you can specifically improve the performance of your shop.

Relationship between SEO and hosting

As the previously described algorithm changes show, the performance and stability of a web application are among the important ranking factors that should be taken into account in the course of SEO measures. These factors in particular can be significantly influenced by hosting.

The Core Web Vitals at a glance

Since the rollout of the Page Experience Update, the load time optimisation of websites should be an elementary component of every SEO strategy. In the context of the Core Web Vitals, three key figures are determined that make up the user experience in the technical sense:

Incidentally, the Core Web Vitals can be measured with various Google tools such as the Google Search Console, PageSpeed Insights, Lighthouse or the Developer Console in Chrome.

The Core Web Vitals of Google at a glance | Graphic: maxcluster

Of course, the loading time is also a relevant factor for the commercial success of an online shop apart from SEO. If a shop loads too slowly, users will statistically leave before completing a conversion. We have already analysed the ways in which the conversion rate of an online shop can be increased in another blog post.

This study by Pingdom shows the connection between the loading time of web applications and the bounce rate. From a page load time of more than two seconds, the bounce rate increases enormously from second to second. 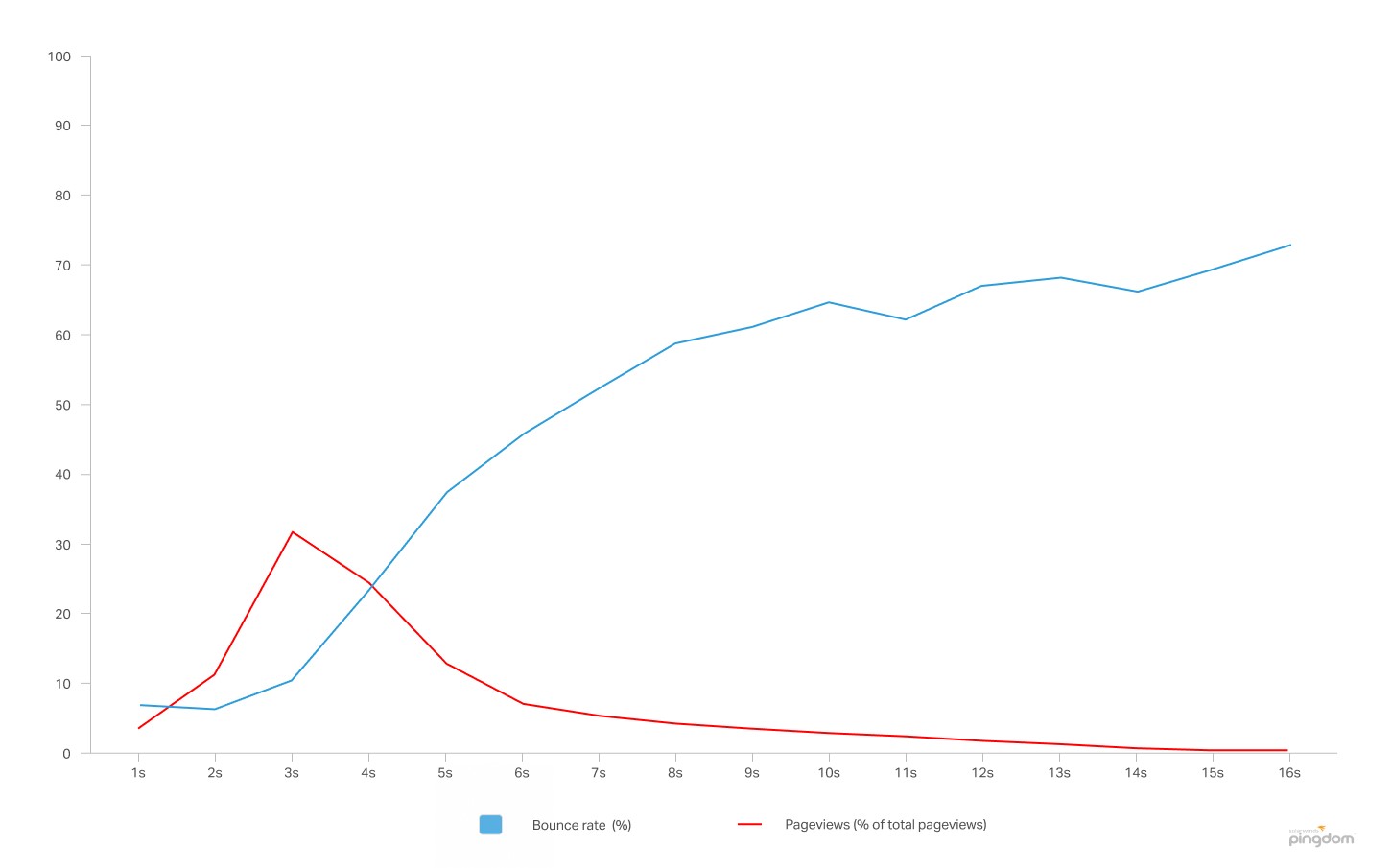 The longer the load time, the greater the bounce rate | Source: Pingdom

There are numerous ways to improve the performance of a web application and thus reduce the page load time.

The basis for good performance is the hardware. Especially for online shops, it is important to pay attention to performance, high availability and sufficient resources so that the shop remains accessible even with high traffic and content is delivered quickly.

But the application itself can also be optimised at various points. The focus of optimisation can be placed on the web server, the online shop itself or the content to be delivered.

The load on the web server can be optimised, for example, with the help of server-side caching or the activation of the HTTP/2 protocol. Software compression via Brotli or gzip](https://maxcluster.de/blog/performance-optimierung-durch-webseitenkomprimierung) can also achieve visible performance improvements.

For the frontend of the application, first analyse the resource requirements of the theme used. In addition, it should be ensured that the web application behaves responsively and that all functions are available on all devices. Content to be delivered, such as images and videos, can be converted into modern file formats, while CSS and JavaScript files can be compressed to reduce resource requirements when loading. In some circumstances, the use of a Content Delivery Network can also ensure better performance.

In the Performance series on our blog we show how the performance of static websites as well as online shops based on Magento and Shopware can be specifically improved. In it, we present various tools and methods for measuring load times and give an overview of the possibilities of web server, frontend and backend optimisation of web applications.

maxcluster's managed e-commerce hosting includes the provision of high-performance hardware for high-traffic scenarios, state-of-the-art security standards and a guaranteed availability of 99.9% on an annual average. In addition, we provide you with many services and tools for performance optimisation free of charge via our e-commerce stack.

With our soon to be available ShopPerformance feature, elaborate performance analyses with over 70 measured parameters can be carried out with just one click. After the analysis, the tool also shows optimisation potential and gives tips for possible improvements.

At maxcluster you also benefit from the proactive monitoring of our support team, which consists of trained Linux administrators. In case of problems, our service is available around the clock and 365 days a year. Do you have any questions about our hosting offers? Feel free to contact our technical support team at any time on +49 5251 4141 350 or by e-mail at beratung@maxcluster.de.

Google Core Updates often involve major adjustments to the ranking algorithm. Google rarely communicates what exactly is being changed. These changes can have a direct impact on the visibility of your online shop in the search results - in both a positive and negative sense.

Nevertheless, the risk of a ranking loss can be minimised by optimising your own application with regard to already known criteria and observing Google's guidelines. From a technical point of view, it is worth optimising the online shop with regard to fast loading times, responsiveness and security. Of course, content optimisation should not be neglected either.

SEO is an ongoing process and must be thought out from the respective target group. Google also clearly communicates that algorithm updates are always designed to improve the user experience. All search engine optimisation measures should therefore also be geared towards improving the user experience of one's own web application.