Security issues in TLS due to outdated versions

TLS is the successor standard to SSL and is used for the encrypted transmission of web pages. The TLS standard, which is continuously being developed, must meet high security requirements because it is used for very many important online activities, including online banking and of course online shopping/e-commerce. TLS connections are established between the browser and the web server, and the web server and browser must support at least one common version. However, supporting old TLS versions to cater to potential customers with old devices often comes at the expense of security for all site users. For example, with TLS version 1.0, there are several known security vulnerabilities (e.g., BEAST, CRIME) that allow a third party to read the contents of encrypted connections. With TLS 1.1, the encrypted connection cannot rely on modern encryption and integrity techniques such as AES and SHA2, which could facilitate attacks. Due to compatibility with existing implementations, these security vulnerabilities cannot always be fixed without a version update.

With the stipulation of the Payment Card Industry (PCI), which became effective on 06/30/2018, online stores with PCI DSS certification can no longer use TLS 1.0.

Disable TLS versions 1.0 and 1.1 via the Managed Center of your cluster. The function is located under the menu item of the web server active on your cluster.

By clicking the green button "TLS Version" you will be shown the available TLS versions and you can disable TLS 1.0 or TLS 1.0 & 1.1. 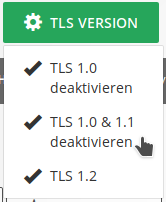 The deactivation applies to all domains set up on your cluster and can be reversed at any time. Since the web server will be restarted when a change is made, there will be a short interruption in availability.

Do you need assistance?

Do you need assistance?